Time Data Systems is excited to announce the wide release of our newest product: Pay on Demand.

Contact us today to activate Pay on Demand, or to learn more about our Attendance on Demand solution for your workforce management.

The past 13 months have been challenging for both businesses and the employees that worked for them. Companies had to close their doors for an undetermined amount of time, then later re-open under new health safety requirements and with many of their employees not returning to their previous jobs for one reason or another. Those working in certain industries – like hospitality and restaurants – were hit especially hard, sometimes not being able to return to their jobs for several months (if the business even financially survived through the pandemic).

Layoffs happened during the time when only companies deemed ‘essential’ were open, making it nearly impossible to find a different job. Now, with COVID vaccinations underway, there is renewed hope that companies can soon move closer to the way they were operating in February 2020. We believe it also means organizations in all industries should be preparing now to attract and retain the best employees, as they will be important agents in reviving our economy. 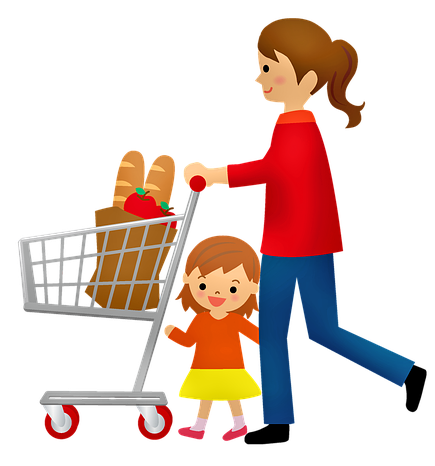 On-demand pay, or “tap for pay”, is a more recent entry into the world of employee benefits, but it has quickly gotten the attention of both workforces and employers. There’s no better time than now to begin offering it at your company, especially since the post-COVID pandemic era is almost here, and those looking for work or considering their current situation will be carefully evaluating how your organization differs from other prospective employers.

Being able to clock out from a shift and be paid immediately for the hours worked can help employees who are having a tight but temporary cash flow issue. Being aware of and offering this innovative employee benefit shows that you care about your workforce and their needs.  And because Pay on Demand is managed by a third-party provider, your company doesn’t need to front any of the money or remember to deduct any advances from the employee’s next paycheck. There is no fee charged to the employer or employee for accessing these wages. Current subscribers of Time Data Systems’ Attendance on Demand can simply add Pay on Demand to their already in-use workforce management solution.

Pay on Demand fits right into your existing processes:

Wage advances made through Pay on Demand are not charged a fee. Other benefits to your workforce include: 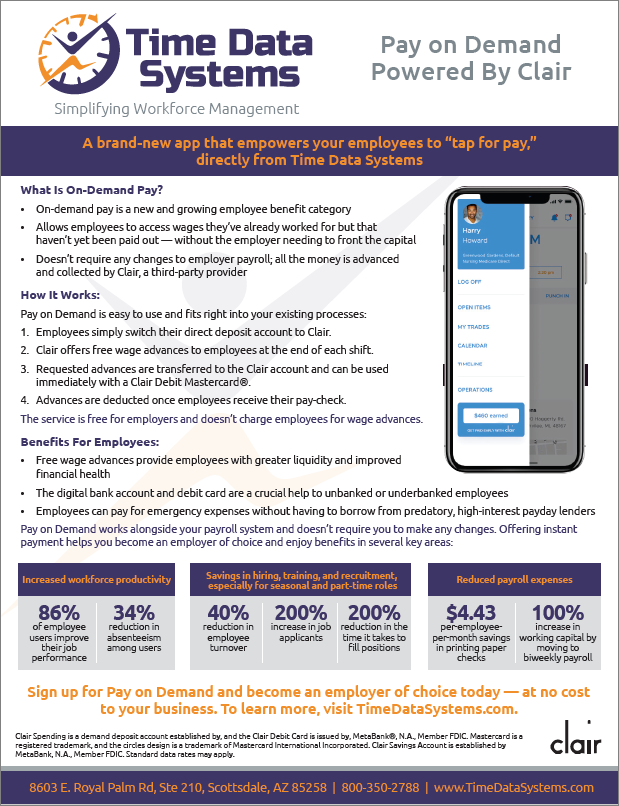 Pay on Demand is becoming more popular with employees, and offering instant wage disbursement helps you attract and keep employees. Instant payment for hours worked requires no changes to your payroll and is simple to set up. Your organization doesn’t need to front any of the funds, the app manages the advances and collections, and Pay on Demand is free for both you and your workforce.

Pay on Demand brings savings in hiring, training, and recruitment (especially for seasonal and part-time positions).

You have questions, we have solutions.  Please give us a call to add Pay on Demand, or to learn more about how our Attendance on Demand solution works for your workforce management.

It happens every single day in every country on the planet – people quit their jobs. Most that do give the customary notice of two weeks, like Georgia resident Andreas Flaten, who resigned his position at an auto repair shop in November 2020. Likewise, we expect the employer to act in a professional manner in all future dealings, such as the final paycheck. Apparently, A OK Walker Luxury Autoworks didn’t get the memo on that last part. 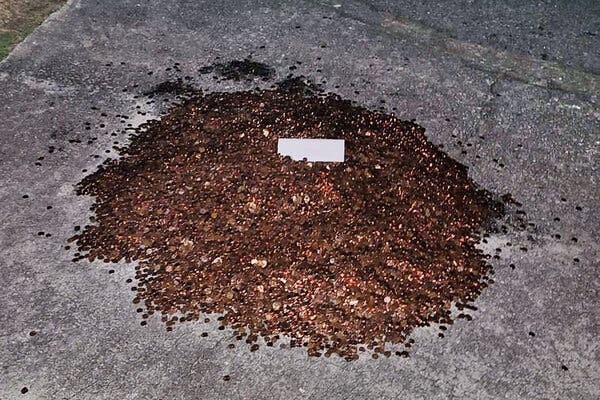 After Flaten quit his position, he patiently waited for his final paycheck of $915 to arrive as promised by his boss, Miles Walker, in January. “Damages” was the excuse Walker gave for not issuing the final payment, and the Georgia Department of Labor was no help to Flaten in resolving the situation. A few months later, the former employee and his girlfriend noticed a mysterious pile in the driveway. Upon closer inspection, the couple found a final pay stub decorated with a written expletive and a huge mound of over 91,000 oily, greasy pennies weighing 500 pounds.

In disbelief at the way business owner Miles Walker handled this rather run-of-the-mill business situation, Flaten’s girlfriend posted to social media about the unique method used to issue her boyfriend’s final paycheck. The former employee was interviewed on TV news, and stated he was spending hours each night cleaning the coins so he could cash them in and finally truly collect on the $915 paycheck, all those months later. Walker, who no one will be voting “Georgia’s Employer of the Year”, was asked about the delivery of pennies and told a news reporter, “I don’t really remember. It doesn’t matter – he got paid, that’s all that matters,” and went on to call his former worker “a weenie”. After those comments, he surely won’t be voted “Boss of the Year” either.

The story does have a happy ending though. Coinstar found out about the pennies’ predicament, picked up the oily coins from Flaten (presumably for later processing), and even rounded the amount up to $1000 and donated $1000 to two animal shelters in the Atlanta area that Flaten chose to receive the gift. For Walker’s part, it would seem by his comments to the news media and his company’s website that he doesn’t feel he’s done anything out of the ordinary. The homepage of his auto repair shop even states “And yes we accept pennies as payment! They are cash!” We’re not sure he’d see the irony if someone with a substantial repair bill dumped hundreds of pounds of pennies in the parking lot and called it payment – but we’d sure like to be a fly on the wall if it ever happened! Imagine how differently this story of a man quitting his job and wanting his final paycheck would have been told if the auto repair shop offered our Pay on Demand option.

Pay On Demand: Rewiring How America Gets Paid